Did you watch the CFP Championship this past Monday?

We did! And also compiled geolocated, sentiment-scored tweets throughout the Ohio State Buckeyes vs. Oregon Ducks second half of the game, into this Tableau data visualization.

Check out the viz below, from one of our data wizards, Mario Carloni.

The third quarter began with an interception by Oregon at 10:50pm EST, followed by the fast 70-yard reception to Byron Marshall from Mariota for a touchdown. Then, at 11:06pm EST, OSU had another turnover which led to another field goal for Oregon, making it a 1-point game, 21-20 Ohio.

In our data visualization of the tweets just prior to the 3rd and 4th quarters of the Championship game, we can see the Oregon fans sentiment exploding, as Oregon made their dramatic push to even up the score.

Unfortunately from here, for Oregon fans, the rest of the game was all Ohio State. And you can notice their waning sentiment in the “Fanthusiasm Over Time” section of the data viz below.

To interact: select map points or line segments using the selection tool to filter the Tweetverse of 330,000 tweets!

Do you think your team could benefit from using a visualization to analyze your data? Want to learn how Syntelli can help? Contact us today! 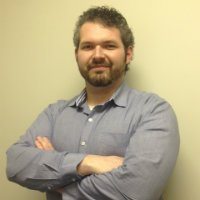 Mario Carloni
Data Scientist
About Mario: Mario performs statistical analysis and reporting for Energy, Manufacturing, and Medical sectors. He is focused on analysing and visualising business logic to allow the discovery of systemic flaws. Prior to Syntelli, Mario was a Research Assistant at the Public Policy Center. While at PPC, Mario worked on social science research for evidence-based policymaking at the state, regional, and local levels for public, private, and nonprofit partners.
Mario received a B.A. in Political Science from the University of Massachusetts. While at UMass, Mario was International Orientation Leader, International Student Conversation Partner, and IT Assistant, gaining broad systems thinking at the technological and social level.

175 zettabytes by 2025. We are collecting more and more #Data and putting it to good use. Find out how #DataEngineers have found a way to turn #DataAnalytics into something that can run your #Business.
https://buff.ly/3gTJTQA