Python – One Language to Rule Them All

The Python programming language has been around since 1991. This begs the question, “Why has it exploded in popularity recently?” 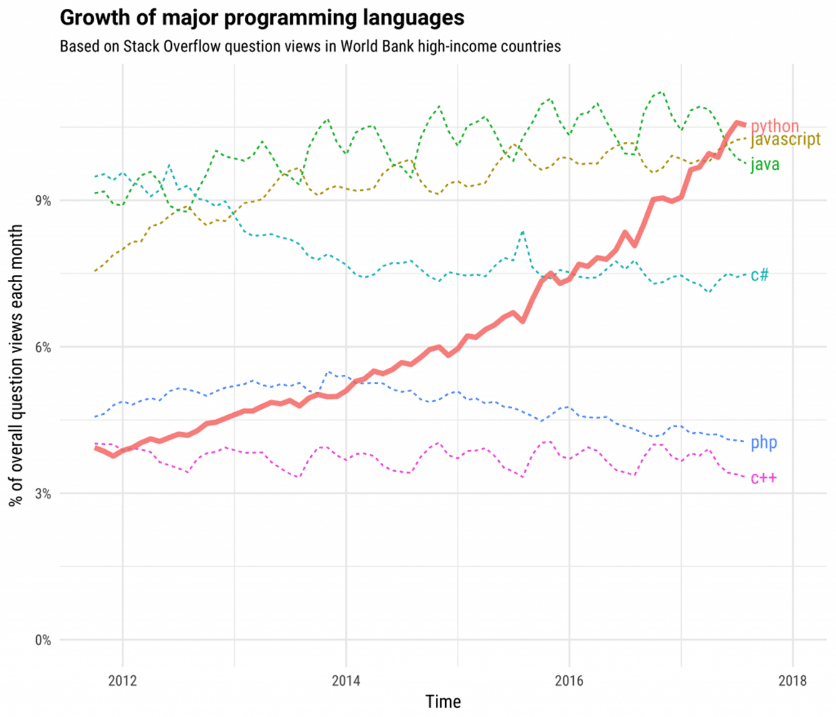 The answer is deceptively simple, THE CLOUD.

As recently as 2016, we were seeing these three use cases handled by separate teams using separate languages for separate purposes.  Languages like Java, Javascript and C# were dominant in the Application Development space, but almost non-existent in the Data Engineering and Data Science spaces.  The same trend could be seen with SQL for Data Engineering, as well as R and SAS for Data Science.  At the time, there was no single language that could efficiently handle all three use cases.  In 2006, Google began investing in developing Python into a more fully-featured language.  Numerous other people also contributed by adding additional packages and libraries for handling many types of tasks.  These libraries not only improved the capabilities of Python, but also greatly reduced the complexity of development.

Today, Python is the only major language that is well-suited for handling Application Development, Data Engineering and Data Science.  This allows organizations to build and maintain one set of coding skills across their entire solution architecture, resulting in leaner development teams, shorter onboarding times and increased collaboration between teams.  The reduced complexity of development also expanded Python’s audience to include Mathematics and Data experts who may not have as much background in traditional application development, further empowering the analytics capabilities of organizations.

So, what does any of this have to do with the cloud?

The cloud has been the single most important technological development over the last decade, empowering organizations to leverage data in ways that were once only possible by the most advanced organizations.  Today, the ability to derive insights from data is a core requirement to stay competitive in nearly every industry.  This leads organizations to invest vast sums of money into cloud-based data solutions comprised of tens, hundreds or even thousands of individual components.  The ability to reach across the entire solution with a single programming language greatly reduces the development effort and “time-to-market” for new and innovative data solutions, all without paying a dime in licensing costs.  That’s why Python is now the most popular programming language.

Learn more about how Syntelli leverages Python to help our customers revolutionize their industries.

Imagine receiving #Data through various sources and devices and being able to make good use of it. This is a reality of today’s society thanks to the use of #IoT. Watch the video and find out how to take advantage of it!
https://buff.ly/3dbrJIz

We’ve all heard of #DataScience and #DataAnalytics but what REALLY is the difference between the two? Discover how these important skills differ and how you can apply the different techniques to your industry.
https://buff.ly/2TLeJBs