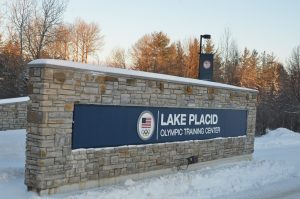 Within moments of jumping into the sled, your mind enters a state of peaceful hyper-awareness. You grab a hold of the D-rings, and much like an orchestra conductor elegantly and effortlessly moving her hands to produce a particularly desired sound, yours perform the implicit procedural tasks necessary to navigate yourself smoothly down the icy track at speeds faster than the legal limit on most highways. As you enter curve 10, 5x the force of gravity can be felt down your neck and along your spine. A rush of frigid air cuts through the vents in your helmet producing a slight fog in your visor. Fortunately, you’ve traversed this mile-long track of ice many times before, and the fog does little to distract you or impede your ability to feel the speed and control of the sled in your fingertips. It’s a rush like none other, only achieved through the most meticulous preparation and precise of movements. For 58 seconds, your mind performs millions of calculations, a majority of which unconsciously. One minor error in “mental rounding” and… CRASH!!! 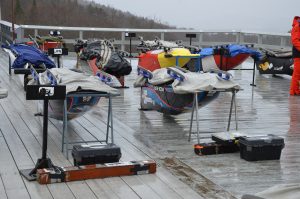 My name is Tyler Hickey, and I am a Data Scientist at Syntelli Solutions. In addition to my work at Syntelli, I am also a pilot on the U.S. Bobsled Team, training for the 2022 Winter Olympic Games in Beijing, China. If you’re wondering, “What the heck is a data scientist doing in a bobsled?”, I ask myself the same question every day. In fact, if you were to estimate the number of people in the world who 1) Studied mathematics, 2) Played college football, and 3) Went on to become a bobsledder… the answer would probably be one. In other words, it’s just me. I make this point to articulate the fact that when I look back on the past 4 years, I have NO rational explanation for how a data scientist found himself siting in the driver’s seat of a bobsled… The reality is that in a sport with roughly 200 athletes worldwide, almost none of us followed the same path, and just about all of us find ourselves asking the same question, “How did I get here?”. 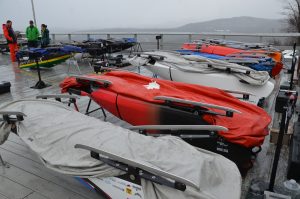 While our answers to this question, languages, cultures, and occupations may vary, there are two common characteristics amongst bobsledders. First, we all come from some sort of athletic background. A large majority of athletes in the sport have previous or existing careers in Track and Field. Others, including myself, come from sports like football, softball, volleyball, and soccer. No matter the sport that one comes from, it can safely be assumed that they competed at a high level (i.e. in college or as a professional). Regardless of one’s previous athletic background, the bobsled community can most simply be described as a group of fierce, dedicated competitors. The second characteristic of a bobsledder is much less tangible and harder to observe than raw spend and strength. Frankly, it is even quite difficult to describe. The word for it does not exist in my lexicon, but the best way that I can describe this characteristic is as a recipe containing the following ingredients:

It’s important to take note of not only the traits themselves in this recipe, but also the amount of each trait required. If you look carefully, you will recognize this equation to be true:

If this sounds confusing, here is a thought that I’ve had over the past couple of years that may better bring this pseudo-math to life.

“Of the hundreds of times that I have jumped in a bobsled, I have never once thought to myself ‘Well… that was a good idea!!!’ yet I keep jumping in, and I will continue to do so.”

I use this quote quite often to describe my experience as a bobsledder, and as far as I know, it’s the best way that I know how. 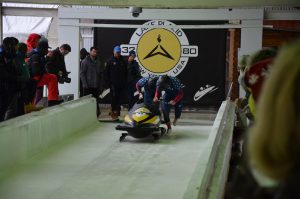 At first glance, the contrast between the hyper-masculine traits and the seemingly disinterest in self-preservation of a bobsled athlete, and the analytical and rational features of a data scientist, appear too significant to reconcile, but finding a connection between my sport and profession has been much easier than I anticipated. In its simplest form, the sport of bobsled is just one big, dangerous physics experiment (you just happen to play a part in it). Your job as a bobsled athlete is to accelerate a roughly 400 lb object for 50 meters, jump in said object, and then navigate that object down a mile-long track of ice and concrete faster than the rest of the competition. Once you jump in the sled, gravity becomes your friend, and friction and drag become your enemy. Fortunately, or unfortunately, gravity is what we would call a “consistent” friend (no pun intended). It will accelerate you down the slippery slope of the track at a constant rate, no more and no less, and in the same way that it does for everyone else. On the other hand, friction and drag can be combatted in several ways. First, let’s talk about friction. 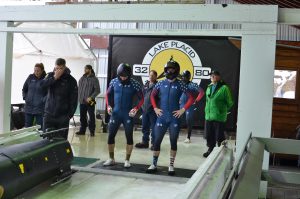 In the sport of bobsled there are two kinds of friction. The first is the friction between steel and ice. A common misconception in our sport is that we navigate the icy track using sharp metal blades. In actuality, our “runners” (what you may refer to as blades) are shaped more like a “U” rather than a “V”. Remember, our goal is to simultaneously reduce friction, while also maintaining control of the sled, and this is most effectively achieved with the “U” shaped runner. To complicate matters more, there are also different radius’ of runners. More narrow runners will achieve more control, but increase friction, while wider runners reduce friction, but also provide less control. This a result of something called “Plough Force”. Thus, runner selection becomes a vital component to race preparation, and is dependent on a multitude of variables, such as the course, temperature, and your skills as a driver to establish more control with less friction. (If you are interested in more of the physical interaction between ice and steel and its role in the sport of bobsled, I highly encourage you to check out this Paper) The second type of friction in bobsled is that which exists between your sled and the walls of the track. This concept is much easier to put your finger on. Essentially, avoid hitting walls because it will a) Increase friction and reduce speed, b) Reduce your momentum, and c) It doesn’t feel too great hitting a wall at 80 mph… : )

Drag, on the other hand, is an entirely different animal. As an athlete, there is only so much that you can do to combat drag. The most significant contributor to the drag experienced during a bobsled run is the aerodynamics of the sled itself. Other than riding position and covering up any holes with duct tape, there is very little that the athletes can do to minimize this force. In reality, drag is something that we as a team work to reduce in the offseason through investment in highly advanced sled engineering and wind tunnel testing (The same kind of wind tunnels used to study the aerodynamics of jet airplanes and racecars…SCIENCE!!!). The amount of data produced from a single 30-minute session of wind-tunnel testing is enough to make your head spin. We continue to alter various aspects of the sled by ¼’s of an inch until drag is minimized. Even the tiniest alteration to the sled can affect the down time of a bobsled run by .01 of second, and in a sport where races are determined by less than .10 seconds, these small improvements in aerodynamics add up and can be the difference between a Gold Medal in the Olympic Games or placing in the middle of the pack.

The connection between data science and bobsled is much stronger than one might initially think (Certainly more than I believed would be the case). It’s a tremendous honor to compete for the U.S.A. at an international level, and it just so happens that the intersection between data, science, and sport present in bobsledding brings many aspects of my life full-circle. Yet, the same thing can be said for most things. The truth is that data science, physics, and mathematics play a roll in nearly every decision, emotion, and experience in our lives. They do not detract from our experiences as humans, they just simply help to explain them… and hopefully improve them in the future. For example, no two runs in a bobsled are the same: Sometimes they are faster, sometimes more chaotic, and other times you find yourself upside down, peacefully crashing down the mountain at 85 mph with nothing but a burn vest and helmet protecting you from serious injury, ice burns, or death… (If that doesn’t sound like living, I don’t know what does). So, its important to use data to identify what causes these differing kinds of experiences. In my sport, I use data to save fractions of a second in a race, as well as for safety, but in my professional life I use the same principles to improve health outcomes within hospitals and to maximize the efficiency of complex financial systems. For me, life is about balance, and what more logical way is there to balance the life of a data scientist than barreling down a mountain at ridiculous speeds on a brisk -30 degree day.